Financials: along with the over 50s, a beneficiary of the vaccine rollout 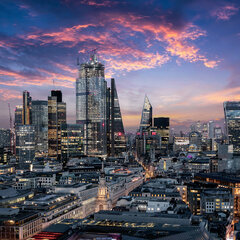 Financials remains one of the cheapest equity market sectors. They jumped sharply in price following the positive news around the coronavirus vaccines in November last year, with the sector likely to be one of the biggest beneficiaries as economies open over the course of this year and into 2022. Their earnings are sensitive to economic activity, therefore, the improving outlook has driven the rally as confidence in the earnings outlook for the sector over the next couple of years has risen significantly. This should not be a surprise.

The sector discounted a much worse downturn than has actually happened, thanks to government and central bank actions to reduce the economic impact of lockdowns and changes in spending patterns. Looking back over previous recessions or market falls, having discounted the bad news financials have always outperformed almost immediately, as evidenced by the early 1990s recession, the UK exiting the ERM, failure of LTCM in 1998, the TMT bubble in 2000, the Iraq war in 2003, the global financial crisis, the Eurozone crisis or the UK referendum in 2016. This time is no different and history suggests there is much further to go.

Earnings for the sector are forecast to be up 38.9% in 2021 and 10% in 2022, led by the recovery in the earnings of bank shares, as new accounting rules have forced banks to make loan loss provisions much earlier in the cycle than in previous downturns. As a result, provisions were set when the outlook in the middle of 2020 was much more opaque and are therefore likely to be too conservative. For example, under its base case forecast, JP Morgan has stated it has excess provisions of $10bn.

In fact, the surprise of this downturn was that last year banks’ shares, as illustrated by the charts below, underperformed by more than they did in the global financial crisis, when banks were failing and confidence in the financial system collapsed. Today it is very different. Bank balance sheets are strong and they have been part of the solution by providing a conduit for government-guaranteed lending to support businesses and allowing many individuals and businesses to take payment holidays.

Furthermore, regulators are likely to remove all remaining restrictions on banks paying dividends and buybacks at some point during the year. US, Asian and Swiss regulators took a pragmatic approach, unlike their Eurozone and UK counterparts, in allowing banks to continue to pay dividends last year, albeit capping the level of payouts. In December, the Federal Reserve announced that banks could restart buybacks, which will be accretive to earnings, and a full restart of dividends in Europe and buybacks in the US will further boost sentiment.

Outside the banking sector, insurance companies are also benefiting from the recovery on the back of an acceleration in the increase in insurance rates for commercial businesses as losses due to business interruption claims and the cancellation or delay of sporting events such as the Olympics which hit profits in 2020, on top of others, fall away. Asset managers and stock exchanges are also riding the recovery as fees generated from higher turnover from trading or the jump in assets under management from higher equity markets boosts profitability.

Against this background, share prices of some growth companies are hitting stratospheric multiples: as interest in stock markets and crypto currencies surges, the risks of a repeat of 2000 come to mind. We believe the madness is being repeated. Share prices are jumping on little or no news. Companies with little or no revenues have seen multiples put on their business that defy logic as evidenced by insider selling. Some investors are saying value no longer matters. However, value always matters eventually.

If you had purchased a basket of global financials on the eve of the financial crisis in May 2007 you would have still made a return of more than 60% over the intervening period, despite the collapse in shares prices during the global financial crisis. By comparison, if you had bought a basket of global technology shares on the eve of the collapse in technology shares in March 2000 you would still be nursing a loss of over 45%, assuming you held them for the same amount of time, because your starting valuation was so high. In fact, you would have had to wait another three years, over 16 in total, just to get your money back.

Investors... risk missing out on the rotation into those areas of the market hit hard by lockdowns which have much more upside.

The financials sector, despite the recent bounce, has seen a significant derating in its relative valuation to global equity markets over recent years. Absolute valuations remain below historical averages too. Investors who have rightly been focused on more growth areas of the stock market in recent years risk missing out on the rotation into those areas of the market hit hard by lockdowns which have much more upside.

There are also significant opportunities within the sector outside the main banking and insurance subsectors. For example, Asian emerging market financials are benefiting from Asia’s better handling of COVID-19 which will allow a faster recovery. They also continue to benefit from the low penetration of financial services to GDP relative to developed markets, underpinning their long-term growth potential. Payments companies continue to benefit from the shift from consumers using cash to card and the growth of e-commerce.

Following the global financial crisis, regulation rightly forced institutions to manage their capital and their risk far more effectively. A decade on and during an era of very low interest rates, the banking sector, for example, continues to make surprisingly high returns (outside Japanese and Eurozone banks), have strong balance sheets and show little evidence of pressure from new entrants who have so far escaped lightly from the regulators.

Investors have also become numbed by the low interest rate narrative, much like the fictitious frog being gently boiled in a saucepan unaware that the temperate has reached danger point. Government bond yields have started to send warning signals as have other asset classes, including financials, that benefit from a change in inflation and interest rate expectations.

It is too early to tell exactly what the opening of Pandora’s box of unprecedented government stimulus along with guaranteed lending will lead to, but investors are arguably taking significant risks  in not having some exposure to financials, or other sectors which are beneficiaries of any change in expectations. Consensus earnings have no benefit built in for higher rates in future years and so the sector may be sensitive to any upward reassessment of the interest rate outlook. The market’s reaction to Pfizer’s vaccine results, with financials outperforming significantly, was entirely rational. We believe it will happen again when investors see the success of vaccines and lockdowns ending. That day is not far away. Do not leave it too late to participate.

Financials and the swear word

COP26 and the long, long road to net zero

The insurance industry: helping us all to mind the gap

2022: Our outlooks for the year ahead